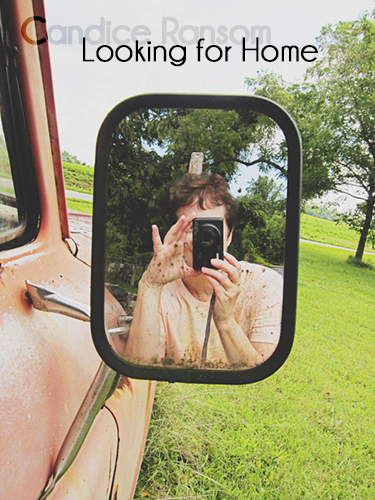 If I ever go looking for my heart’s desire again, I won’t look any further than my back yard. Because if it isn’t there, I never really lost it to begin with.

I was born in one of the nicest houses in Manassas, Virginia, but my father ran around and we had to move to a smaller house. Then Daddy disappeared for good, leaving my mother with a baby, a six-year-old, and no money. We piled in with my mother’s sister and brother-in-law, who lived next to the house I was born in. We stayed nearly five years.

Standing in my crib, I looked out the window at the brick house next door. The fly-specked screen made the house seem like a mirage. My sister whispered that that was our real home. I was too young to understand, but I knew the place we lived in wasn’t home. We had a roof over our heads, we were told many times, and we should be glad.

It was hard to be glad when the walls shivered from harsh words, thrown dishes, and brandished guns. It was hard to be glad when I had to sit outside all day. I stared across the driveway at the house that used to be ours. Other people lived there now. Another little girl played with my sister’s dollhouse that we had to leave behind. My mother remarried and we moved to a new house in rural Fairfax County. Woods pressed close to the muddy yard. Baby black snakes hatched and died on our back porch. At night I gazed out my window at the shapes made by black trees against a blacker sky.

Gradually the house became home. I started school and learned to read. My favorite books were mysteries set in old houses. I wished we lived in a crumbling Victorian that was haunted. Our house was too new to be haunted.

In vain I searched for secret passageways, a feature sadly lacking in our modern brick ranch. One day I pushed through the crinolines and full skirts in my sister’s closet and found a panel. Mama caught me running down the hall with my stepfather’s hammer before I could smash through the panel that led to the bathtub plumbing.

The summer I was ten we drove to Mama’s home place in the Valley for a funeral. I wandered up the winding road next to the cemetery. An old stone house stood alone in a field of wheat stubble. I itched to go inside that house, track down its ghosts, run my hand over ancient bloodstains on the worn floorboards.

From then on, I drew pictures of tottering mansions with shutters askew and broken windows, and wrote stories set in houses soaked with ghosts, hidden rooms, missing family silver, and maps to buried backyard treasure.

In the Smithsonian Museum of American History, most people seek out the ruby slippers worn by Judy Garland in The Wizard of Oz. Back when it was called the Museum of History and Technology my eleven-year-old self stood entranced in front of a 1930s kitchen. An oilcloth-covered table sat in the center where Dad read the paper. Mom fixed breakfast at a chrome-trimmed enamel stove.

There was something solid and reassuring about the chunky Jadeite salt and pepper shakers in the Hoosier cabinet, something mesmerizing in the curves of the oversized dials on the stove. I longed for the glass to dissolve so I could step inside.

Instead I began collecting for my own 1930s kitchen: wooden rolling pins, green glass juicers, cereal advertisements, cookbooks. The 1930s kitchen in the Museum of American History has been replaced by a replica of Julia Child’s kitchen. You can’t envision yourself in that kitchen any more than you can imagine bunking at Monticello, a place too clearly defined by Jefferson. In faithfully recreating reality, the comfort of illusion is often lost.

Despite my dream to live in a restored Queen Anne, my husband and I built a new farmhouse. One sunny January day we were cruising around Louisa County. I spotted an old store and asked him to stop. I snapped a picture of the unpainted store against the bright blue winter sky. Peering in the dusty window, I spied a cobwebbed doll in a faded red dress. Something turned over in me, a counter that dropped back fifty years. I was once again ten—awake, curious. Places were out there waiting for me.

That summer I stumbled on an old house with a piano on its front porch. Maple seedlings grew between the keys. The front door was open, an invitation. I went inside and took pictures. I did not touch anything. When I came out a few minutes later, blinking in the bright sun, it occurred to me I had been given a gift. The house had revealed part of its story to me.

Online I found other photographers who document abandoned places. I began posting my photos on my blog, framed with a narrative of my experience. The more properties I explored, the more I realized something larger was at work. The old houses and stores and tractors forgotten in sheds ask to be remembered before they fall down or melt into the ground.

Not every house I find invites me inside. And not every house surrenders its past. Sometimes the walls are mute, the windows blind-eyed. The spirit of the place is gone.

A family still lives in the house I was born in. On the rare occasions I drive through Manassas, I stare at the house, as I’d once stared at it from my crib. It has never seemed like home.

The last time I walked through the house I grew up in was the day of my mother’s funeral. My stepfather had died the year before. My husband took a picture of the house from the bottom of the hill. When the film was processed, I noticed the brick ranch was wreathed in morning mist.

We closed the door that day and I never went back. Some years later the house was torn down. Nearly every night, I dream I’m back in my house.

Sometimes I study the picture my husband took. The house stopped living that day. The secrets, the mysteries I thought didn’t exist, drifted upward in the mist.

I don’t stop and photograph every old house I see along back roads. But I always, always notice them. In my mind, I’m ten years old again, gazing at the stone house in the stubbly field, wondering if it is haunted.

Now I know they all are.

Printing is not supported at the primary Gallery Thumbnail page. Please first navigate to a specific Image before printing.